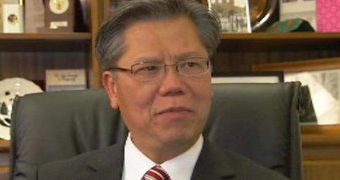 Now 60, he was born in Quang Tri in central Vietnam in 1954.He is married to Lan, who arrived with him on a boat from Vietnam 36 years ago.They have two sons, Don and Kim, who they named after Australian cricketers Don Bradman and Kim Hughes. Mr Le holds a degree in economics and accountancy and a Masters Degree in Business Administration from Adelaide University. He is a member of the Certified Practising Accountants and from 1991 was a senior manager of the Australian Securities and Investments Commission until he retired in early 2009. He is a patron and member of more than 30 community organisations.
Mr Le was appointed as an Officer in the Order of Australia on Australia Day in 2010.He has been awarded the Australia Day Medal for outstanding service to the Australian Securities and Investments Commission.He holds the Australian Centenary Medal ‘for service to the advancement of multiculturalism in Australia’ Adelaide University awarded him an honorary doctorate for service to society in 2008 and Flinders University bestowed an honour in 2011